The Brushy Creek Tributary, located upstream of Harvey Penick Drive, has two abrupt turns and was experiencing significant erosion in three areas of interest within the Forest Creek neighborhood. Location A is at an existing concrete flume which protects an existing 8” wastewater line. The concrete flume was experiencing two feet of down-cutting and flow has undermined the structure. Location B is the outside bend of the abrupt turn just upstream of Harvey Penick Drive. Along the right bank, there is approximately two feet of down-cutting at the existing concrete riprap toe, which was beginning to undermine the armoring. Location C is another abrupt turn further upstream near Harvey Penick Cove. The unlined outside bank is experiencing significant erosion and is encroaching upon the adjacent residential fence line. KFA was tasked with preliminary engineering and design services in order to determine the optimal solution to mitigate the existing erosion problems and prevent further erosion in this area. 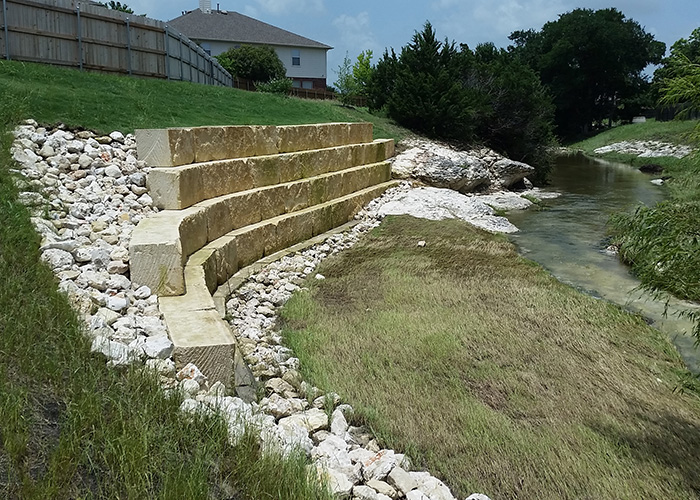 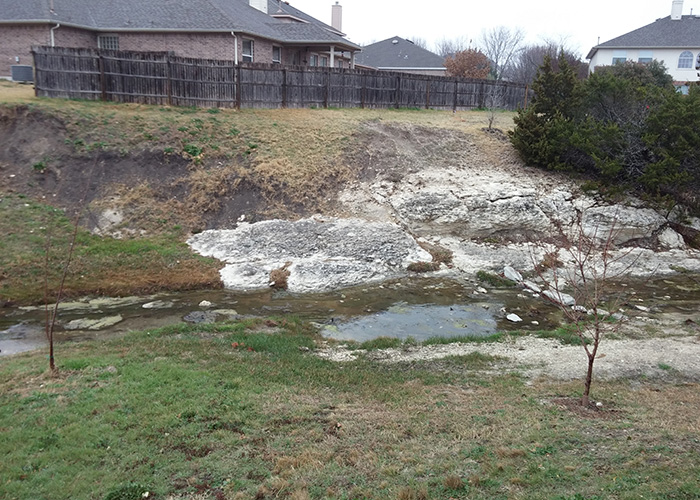 KFA performed a hydrologic and hydraulic analysis to develop a Preliminary Engineering Report which identified and quantified the erosive forces acting upon the areas. Several alternatives at each location were presented to the city for review. KFA then developed plans, specifications and estimates for construction of the preferred erosion control alternatives. At Location A, the first alternative included repairing the existing concrete flume and extending the toes. The city selected the second alternative which included replacing the existing concrete flume with flexible dry rock riprap sized to withstand the creek flows. At Location B, the first alternative consisted of placing dry rock riprap at the toe of the existing concrete riprap to protect against further down-cutting. The second alternative, which was selected by the city, included placing grouted rock riprap as well as filling the voids under the existing concrete riprap caused by the down-cutting. At Location C, four alternatives were presented to the City: cut limestone blocks, rock gabions, green gabions, or reinforced mesh in order to reclaim and protect the outside bank. The city selected the cut limestone blocks in order to reclaim some of the eroded bank and establish a flatter slope. The biggest challenge was satisfying the aesthetic expectation of the local neighborhood while providing an economical solution.

The project protected the adjacent properties from erosion and ensured a wastewater line crossing would not be compromised for future extreme storm events. The community benefited from improved water quality in the creek, a stable slope condition and from an aesthetically pleasing feature.