Reducing local flooding with drainage improvements in the Guadalupe area

The Guadalupe Street Storm Drain Improvements project is ranked as a top priority in the city of Austin’s Local Flood Risk Reduction storm drain improvements projects. The project is located in central Austin, within the Waller Creek watershed, and is bounded by Avenue D, West 33rd St., Guadalupe St., and West 47th St. The existing storm drain system was originally constructed between 1928 and 1930 and initial studies indicated that most of the over 5-miles of existing storm drain pipe does not have capacity to convey to the 2-year design event. This has resulted in frequent flooding to the area. The project area has formal records of 16 building flooding complaints, 14 yard complaints, and 13 streets complaints. The city of Austin contracted KFA to assist in the analysis of the storm drain system and perform preliminary engineering services. 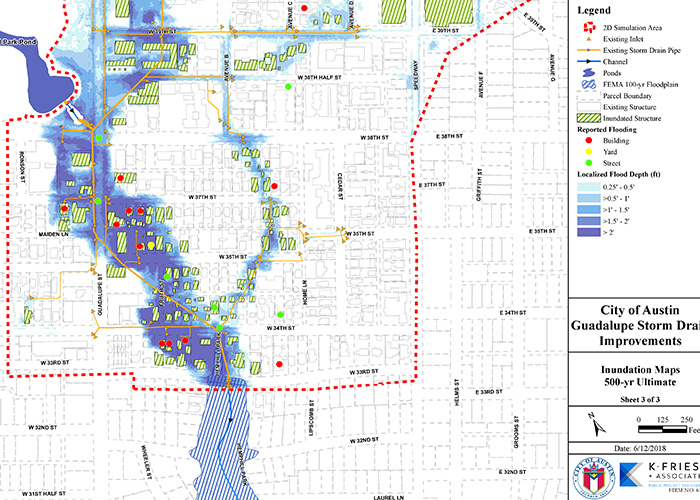 KFA is working on a preliminary engineering report (PER) to develop optimized solutions to reduce flooding to the area. A detailed InfoWorks ICM 2-dimensional (2D) hydraulic model was under development to simulate existing conditions including multiple recent historical rainfall events which will be used to validate/calibrate the models. The detailed 2D hydraulic model will be utilized to quickly iterate through potential solutions that may include pond improvements, storm drain upgrades, street improvements, and channelization. The team had to be efficient in collecting data, documenting assumptions and making decisions. The data available for the existing storm sewer infrastructure constructed in the 1920s is very limited and unorganized. The various data sources often contradicted each other and various field visits were completed to confirm assumptions. Much of the information on the ponds do not match survey data or topographic information. The biggest challenge is ensuring the collected and processed data was “good enough” without spending excessive time making it “too perfect”. The project presented an opportunity for the city of Austin in developing their policy and criteria for 2D modeling such as exploring various non-standardized issues including: 2D modeling terrain development; rain-on-mesh vs. detailed catchment modeling; H&H design software transformations; and simulation of inlet capacity. Frequent communication will be necessary to inform and include the city on all assumptions and decisions that are made. In addition, the Watershed Protection Department is very large, and often varying opinions are expressed from different departments requiring the KFA team to conduct significant analysis to reach a decision. KFA will capture the various assumptions within the preliminary engineering report.

KFA completed the PER in 2019. The City is using the project concepts from the PER to design and construct the recommended improvements to reduce flood risk in the project area. Construction is anticipated to begin in 2024.